For those of you following this blog or who have at least read last Tuesday’s post here, I can report that the dialogue with my Healer archetype (which I continued in greater depth in privacy after posting the excerpt) proved very helpful. I was able to take a small but meaningful step in the direction of my own Life Dream! So, I am thankful to the blog, and to you all as a collective “someone” (and as individuals) to share this WITH, for the opportunity to explore my own archetypal reservoir.

This week I have been contemplating the idea of a CONSTELLATION in relation to an ensemble cast of archetypal character modes. Look at this image of Orion, for instance. What makes a stellar constellation more than a random arrangement of stars observed in the night sky? Although it is true that people of different cultures may recognize different constellations more or less, and though of course they will attach different connotations even to shared constellation images, still there is something about a constellation that is like a gestalt, whereby “the sum (total pattern) is greater than the sum of its parts.” I have noticed this in written word forms, too. Think about it; once you rearrange a scrambled word, as in a word game like Scrabble or Words with Friends, doesn’t it just feel better to see the word in its meaningful form?

For example:   NAMGAITION becomes “IMAGINATION”; doesn’t that just FEEL “right” and “better” than the scrambled letters?

So then, let’s turn back to our weekly theme of Your Archetype Allies. The example I usually give to help people understand the concept of a “mythic ensemble cast of Archetype characters” is Dorothy from The Wizard of Oz with her ensemble cast of unrealized or non-integrated parts of Self in the form of the Scarecrow, Tin Man and the Cowardly Lion (and with Toto as her Animus companion). Notice how as the story unfolds, each of these character shards, as it were, gain strength individually while also gradually forming a coherent unit of archetypal Allies, manifesting fully in the scene in which the 3 (plus Toto) literally don Warrior uniforms and act as a collective, harmonious unit to rescue Dorothy from the Wicked Witch’s castle.  Once this well integrated unit is fully assembled, with Dorothy in the Center again, they have the combined strength needed to accomplish their Mission: to dissolve the energy of the negative Witch. Dorothy can then assimilate and convert that negative power to a positive energy, first by taking the broomstick of the Witch of the West and then ultimately by learning to ‘stand in her own power,’ symbolized by the ruby slippers.

Whenever you think of The Wizard of Oz, you think of the ensemble assembly, right? Dorothy does not act “alone.” Even after she returns to Kansas (her “Conscious” domain; I just realized how similar those words are!), we know that her Allies will always be available in her Unconscious (“not in Kansas anymore!”) Land of Oz.

So let’s return to YOUR QUEST: a meaningful goal you aim to achieve that you feel a need to develop Strengths for in order to ultimately pursue and attain it fully. Reviewing the Twelve Universal Archetypes I have presented this week, I invite you to consider what COMBINATION of these Archetypal characters, in either Strength or Shadow trait modes (see Sunday and Tuesday’s posts this week for brief descriptions of their character traits), might form a proper CONSTELLATION of Archetypal Allies which could, by serving together as co-workers with You as the central Self, help you to go after and to realize your Goal?

Below I include an Archetype Wheel. This shows the same Universal 12 Archetypes developed by Dr. Charles and Nin Bebeau (and Debra J. Breazzano, M.A.,LPC) that I will be introducing more formally in LIFE PATHS and that appear in descriptions within Sunday and Tuesday’s posts this current week. This Wheel represents how these 12 primordial archetype figures relate to the four elements (Earth, Air, Fire and Water) and to the three stages of any process (I=origination,II=maintenance and III=dissolution). 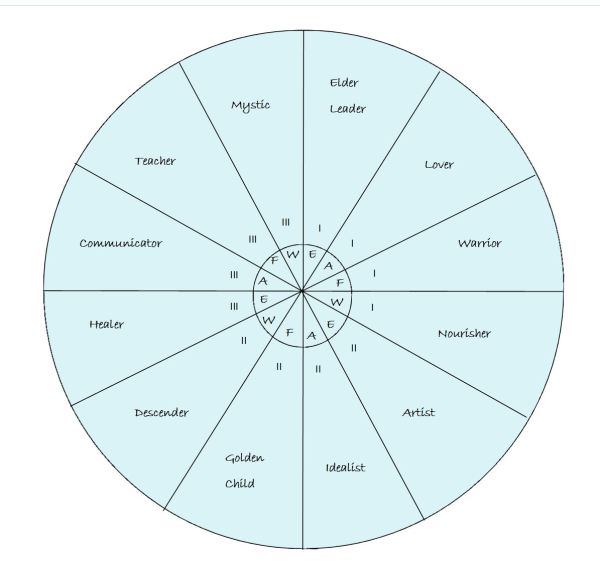 What CONSTELLATION or combination of the above Archetype Characters could YOU unite with to form a strong ALLIANCE GROUP that can help you achieve your specific Goal? Please see if you can identify a subset of these 12 Universal Archetype figures that you can enlist to accomplish your goal.

I invite you to journal about, talk about, and engage in active imagination with the individual members of your Archetypal Constellation! Get to know each one, their strengths and weaknesses, hopes and fears, and what they bring to the Assembly that can help you to realize your Goal. You might wish to write a narrative STORY about you and your Archetypal Constellation–like in the Wizard of Oz–that envisions your goal and how your ensemble cast could act together as an ensemble cast to realize your goal or Life Dream!

I invite your Insights and Stories!