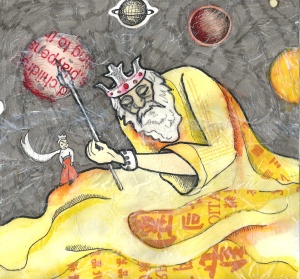 “The Little Prince and the King” illustration by Carrie Neumayer

As a child, I was intrigued when I read the chapter in Antoine de Saint-Exupery’s The Little Prince where the Prince visits the planet of a king who has no subjects. He invites the Prince to become his subject and declares him to be his Minister of Justice. The Prince declines, asserting that he is a traveler and he must be on his way. The exchange continues:

“I,” replied the little prince, “do not like to condemn anyone to death. And now I think I will go on my way.”

But the little prince, having now completed his preparations for departure, had no wish to grieve the old monarch.

“If Your Majesty wishes to be promptly obeyed,” he said, “he should be able to give me a reasonable order. He should be able, for example, to order me to be gone by the end of one minute. It seems to me that conditions are favorable . . .”

As the king made no answer, the little prince hesitated a moment. Then, with a sigh, he took his leave.

“I make you my Ambassador,” the king called out, hastily.

He had a magnificent air of authority.

I was impressed by the king’s flexibility, if not by his idea of dominion. So, let me relate this to a sample Better Endings story from my own life, about this week’s topic of Changed Relationships:

We grew apart. My spouse was a global traveler by nature, with parents from Italy who raised their family in Venezuela. It had only been a matter of time. I returned to Colorado from a road trip to visit my family in New York state. The forest home we had bought together and nurtured together for over three years stood silent and empty, over half of the furniture removed. I knew this would be happening, but still it struck me like a stone.

I was not alone. My two dogs and three cats cuddled around me that night on the bed, as if to show they understood their own relationships with me had taken a major turn.

That was over twelve years ago. I have not sought any human involvement since and genuinely feel I will be happiest never going that route again. That was ‘the One’, or so I had believed. Yet, in retrospect so many amazing opportunities have come my way since then; opportunities I would probably not have been free to fulfill as I have, had that relationship–or any romantic relationship–lasted. I have a stepson, also a global traveler, who spends nearly half the year as my housemate, so I have companionship and help with the house I moved to after leaving the forest.  Four pets remain my closest family at home.

My story reminds me of the Little Prince’s encounter with the ‘reasonable’ King because my spouse and I needed to accept each others’ needs to pursue our own dreams in our own ways. It also reminds me of a black and white movie I once came upon on late night TV several years ago, called “The Man-Eating Tiger”. A mercenary during World war II was hired to rid an Indian jungle village of the threat of a man-eating tiger. A nurse at a clinic there had once been the undeclared love of the mercenary, but she married his best friend. This friend was now missing in action. The mercenary felt conflicted; he wanted to pursue the woman, to rekindle a flame between them, but he knew his friend might yet return. The scene I recall strongly involved the mercenary taking a long walk at night with an Indian woman, a servant or another nurse he had confided in about his conflict. The Indian woman said she had observed Americans “in love” before. She found that our concept of love was what she would call possessiveness rather than true, unconditional love. If one genuinely loves another, she told the man wisely, then one desires no more than the total happiness of the beloved. If that beloved’s life calls him or her away from the relationship, then one must accept that with humility and send the beloved on their way with gratitude that they will be achieving a greater happiness.

Like the Little Prince‘s king, we can establish relationships that are not solely constructed on our own terms. With unconditional love we can promote a win-win situation, bringing Better Endings for all concerned, so long as we are open enough to accept each other’s dreams and the necessary means to achieve those. Certainly the more desirable pathway to many peoples’ better endings is from staying in relationship rather than in separation, so I am definitely not advocating a quick release from your deeply established relationship. But life/divinity/spirit or the Universe brings us circumstances and reveals to us over time what is required for all of our advancement. We can grow and learn from all life’s lessons and benefit from each of the beautiful connections we forge along the way.

Practice your own Better Endings this week by journaling or writing about, or talking about or contemplating Relationship Changes and all that you have learned from them. Please feel free to Comment with your insights, or send in your story to be included as a Story of the Week (with your author’s byline, bio, and website info).