The opening story in James Joyce’s short story anthology Dubliners is a tale not actually about Departure–though it appears to be on the surface–but rather it is about a Refusal of the Call to Depart on a potentially liberating heroic adventure. The protagonist, Eveline, lives with her widowed father and brothers in Dublin. She tends to their needs as a housewife ‘should,’ standing in for her departed mother.  She meets a sailor, Frank, who would whisk her away to Buenos Aires (“Good Air”); far away from  family, from her nation of Ireland, from her Church community. Throughout the story Eveline muses about Frank’s offer to leave, but as the ten page story unfolds we realize that Eveline cannot possibly leave. Joyce describes Eveline at the end point, refusing to step forward as her lover holds their tickets at the boat, “passive, like a helpless animal.”

The opening lines of Eveline set up the pathos:

“She sat at the window watching the evening invade the avenue. Her head was leaned against the window curtains and in her nostrils was the odour of dusty cretonne. She was tired.”

She stood among the swaying crowd in the station at the North Wall. He held her hand and she knew that he was speaking to her, saying something about the passage over and over again. The station was full of soldiers with brown baggages. Through the wide doors of the sheds she caught a glimpse of the black mass of the boat, lying in beside the quay wall, with illumined portholes. She answered nothing. She felt her cheek pale and cold and, out of a maze of distress, she prayed to God to direct her, to show her what was her duty. The boat blew a long mournful whistle into the mist. If she went, tomorrow she would be on the sea with Frank, steaming towards Buenos Ayres. Their passage had been booked. Could she still draw back after all he had done for her? Her distress awoke a nausea in her body and she kept moving her lips in silent fervent prayer.

A bell clanged upon her heart. She felt him seize her hand:

All the seas of the world tumbled about her heart. He was drawing her into them: he would drown her. She gripped with both hands at the iron railing.

No! No! No! It was impossible. Her hands clutched the iron in frenzy. Amid the seas she sent a cry of anguish.

He rushed beyond the barrier and called to her to follow. He was shouted at to go on but he still called to her. She set her white face to him, passive, like a helpless animal. Her eyes gave him no sign of love or farewell or recognition.” 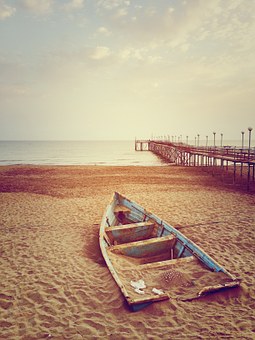 “Eveline” depicts a Refusal of the Call to Depart upon a Hero’s Adventure. But the story does not have to end with Eveline’s surrender to her essentially paralyzed life condition. I propose  below a “Better Ending” version of Eveline.

My re-vision of “Eveline” transpires in contemporary Ireland, where 62% of the population is urbanized and globalization offers many options to the youth for emigration and jobs.

Eve stood at the railing of the Odyssey’s prow; straining to find Frank in the harbor crowd as the boat’s powerful engines pulled it away from the shore. Why had he not come? She felt deeply into the pocket of her windbreaker, palming the passage stub, a misty rain in the morning air obscuring her view of all that she was leaving: her father, the rocky countryside, even the steeple of the church she had attended since baptism. Her woven wallet was secure in her pocket, with all the money she had saved from weekly allowances over the last thirteen years. She covered her head with the windbreaker’s hood and tied it so only her eyes were exposed. She turned away from the rail and climbed down from the bow into the passenger deck. Ten or twelve tourists peered out the windows, happy enough to be safe and dry. Eveline, drenched from her watch above, gazed out an open window from her wooden pew seat. East was her direction now. Her very life was about to begin.

3 thoughts on “Refusing the Call? A James Joyce Cautionary Tale”