When Star Wars first emerged in 1977, I was there. I crossed the city of Buffalo twelve times on my little yellow Puch moped to see that first installment. I could very much relate to the idea of the Force as Spirit then, and I still do. The continuing saga of Star Wars including Episode VII, which I saw in 3D at an IMAX theatre on the first day it came out last week, continues to develop the theme of the Force but they have emphasized the notion of “bringing balance to the Force” with the characters of Anakin Skywalker (Darth Vader) and now his dark, worrisome grandson, Kylo Ren. Thus the story continually pits the Light Side against the Dark Side of the Force, as if this dualistic jostling can ever bring true Balance or peace. No, they cancel each other out but they can never bring a genuine, lasting Balance. So, what does? 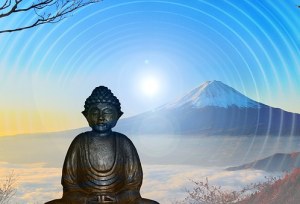 I want to say here that the Force as I know it, and as many of you do who practice active contemplation, prayer or deep meditation, is not inherently dualistic. We can understand It as trinary: embodying the Light, the Dark, and the NEUTRAL force emanations of Spirit. The Light and Dark are only energetic expressions of that Neutral force operating within the limited worlds of Duality.

To answer power with power,

the Jedi way this is not.

In this war, a danger there is,

of losing who we are. – Yoda

Note the difference between Jedi Knights and Jedi Masters.  Jedi Knights “fight for the Good;” they serve the Light Side of the Force as versus Siths, who serve the Dark Emperor and their own selfish desires. But true, tempered Jedi Masters generally exhibit Detachment and acceptance in the face of conflict. They might fight if they are called upon to defend some worthy cause in the worlds of duality, but they have their Home in Divine Love or in the Heart of Spirit Itself.

To connect with Spirit you need only find Your Center and hold your awareness Here. Do not be pulled to the right or to the left, “right” or “wrong,” up or down, or in any Outer direction that is dependent on external pressures. Find your genuine, core spiritual nature within and operate from this Soul perspective. It will not steer you wrong if you Listen closely to what your Heart—which could take the form of an inner or an outer, tried and trusted spiritual Guide—advises, and act accordingly.

The Jedi Masters represent an Elder Leader archetype form that I wish to celebrate and invite you to cultivate this month. What is your own ELDER LEADER nature? When does it emerge in you in its most balanced form?  Invite your ELDER LEADER to reveal Its WAY to you this month of January, as January is the astrological month associated with Capricorn and the Elder Leader Archetype Ally.

Remember, the FORCE IS with you, always! May it inform your Way!