The GOLDEN CHILD persona archetype occurs in classic mythology with figures such as Theseus, Hercules and Achilles—each of whom also show WARRIOR archetypal qualities—and it shows up in many fictional stories and popular films as well. “Little Buddha” is a great film about the search for the reincarnated Buddha to become the next Dalai Lama in Tibetan Buddhism. This is an explicit Golden Child construct which demonstrates the value of this key archetypal figure as a persona that potentially benefits all of humanity and indeed all life. Yesterday I watched part of “Roman Holiday” with my family, starring Audrey Hepburn in 1953 as a young princess who tires of her royal duties and longs to have a normal life experience. Here is shown the burden that a Golden Child might have to bear in being a central figure for her or his community, as if they are always on stage or serving their public.

My own dog Sophie (full name: Sophia Grace Wattsida {the last name being the word for ‘dog’ in Zuni!}) is a Golden Child to me. Her breed and style is even called a ‘Golden’ Shorkie because of her hair color as a Shitzu-Yorkie mix. Currently she is with me on her fifth cross-country trip at 5 yrs old; every summer I pack the car and Sophie and I traverse America together from Colorado to New York state and back to visit my mother and siblings.

Just yesterday I was realizing how I can learn a lot from my little Golden Shorkie Sophie. She has the social skills I sometimes lack, ready to greet (and lick/kiss) just about anyone, and tromping gleefully into the largest of crowds with aplomb, eager for the new experience and smells. I myself have a touch of social anxiety that often keeps me away from crowds of more than a few even well known persons; parties, as my close friends and coworkers know, are my most daunting challenge; I usually feel compelled to just stay away. But last night, with my sister Lee and with Sophie on her leash beside me, I actually attended part of a concert on the lawn of a ski area, with Blood, Sweat and Tears! Sophie showed no fear and just wanted to get off the leash to dart about freely in the large crowd there gathered (I held onto her instead, of course, to her frustration). As a Golden Child I think she feels it is her obligation to greet everyone with a proper licking! 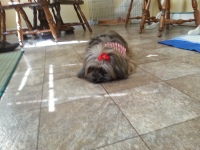 Anyway, after dinner outdoors with my siblings and the concert, I had a scare overnight as my Golden Sophie was hyperventilating most of the night. She must have gotten too much sun or “too much of a good thing” in dinner handouts from me perhaps. We are many miles away from any animal emergency clinic here, so I tended her as best I knew to do with extra water and care, hoping she was going to be okay through the night. She is! Whew! She truly is a golden companion to me.

Do you have a Golden Child in your life? Often if we do not express an archetype as a primary aspect of our own Self’s archetypal assemblage, it may be present in people (pets are also people!) important in our lives.

I invite your Comments and Stories!