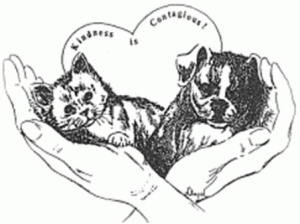 Better Endings are so often bittersweet. Yesterday, early evening after a long day at work, I put Sophie (my dog/see post 11-6) into the car and we headed to a community group meeting I was conducting. We were a good hour early, and I wasn’t sure what we would do for that extra hour, but I figured I would walk Sophie for some quality time together before my meeting.

Approaching a busy intersection, I noticed a man crouching down in the opposite lane, apparently in distress. While my car was stopped for the intersection, I watched as the man alternately stood and then kneeled again, several times. Then he stood up, seeing traffic approaching as the light had changed, and he crossed back to the opposite sidewalk. Then I saw why the man had been kneeling. There was a fairly large dog, lying in the middle of the opposite left lane! Immediately, I flashed my headlights and blared my horn several times at the now fast approaching traffic. I got out of my car to signal traffic and kneeled down to examine the dog. The dog was orange and white, a middle-aged Australian Shepherd mix with deep brown eyes. No collar. I urged him to move across the street and he scuttled as best he could with his front legs dragging his rear. Traffic remained stalled.  Drivers honked impatiently, but most saw the dog and held their ground to help.

The injured dog was scared; once he reached the sidewalk, he scuttled a bit further to reach a gravelly dirt clearing, as far away as he could get from the brutal lights of cars and fast food chain stores . Four or five other concerned people came over to huddle around the dog. This was in a depressed part of town, and three apparently homeless men were among the first to come to the dog’s aid, crouching by him and talking softly, in hushed tones. Two young women, one with her husband, also joined our huddle, stroking the dog gently.

I parked my car and called 911.    One of the other women called the Humane Society, which sent a truck immediately, except that the Humane Society was at least  20 minutes away.  The dog by now was bleeding from his nose.  Someone covered his torso with a blanket because he was shivering.

“Not a good sign,” a young man said about the bleeding. We all silently agreed.  Two of the women were holding back tears. The dog was more sedate now, eyes still open, receiving our loving attention, but obviously in a state of shock.

FINALLY the Humane Society truck arrived. The driver, a young woman with dark hair and eyes, came over to attend to the dog.   She scanned his neck to see if he had an ID chip, then she used an orange, rope-like belt to muzzle the dog’s nose while she and one of the young men at the scene lifted him and carried him across to the truck, placing him into one of the larger cage compartments.

I felt it was most likely that this injured dog would not survive; perhaps he would pass away en route to the Humane Society, or perhaps they would euthanize him once there because of the extent of his obvious internal bleeding.   Possibly they could save him, but that didn’t feel likely.

So, back to Better Endings. This beautiful Soul in a dog’s body would probably have had a much more sudden-impact death experience if someone had not been able to stop traffic so he could get off from the busy street. His death would have been sudden and tragic. Instead, at least several other Souls, in our human bodies, were able to surround him with love and concern, companions to comfort him in this suffering.

He probably died, anyway. Having tragically lost a beloved dog friend myself in recent years (a later story, surely), it was all I could do not to follow the truck back to the Humane Society to check on the dog’s condition.  I had a meeting to attend. I needed to let go, as all those present at the scene understood. We all simply got back into our cars and drove off separately into the evening.

Better Endings are so often bittersweet.

Following up from the experience last Thursday (11-8) of trying to help a dog who was hit by a car, yesterday I went to the Humane Society. After talking with a friend over lunch about my experience, she said she had heard on TV a news story about a service dog being lost by a woman in the area where the accident occurred. So, I went to the Humane Society thinking that even though the dog probably had died from his injuries, maybe the information about a possible owner might at least allow the owner to learn of what had happened.

After quite a bit of searching through the online records at the Humane Society, a woman was able to trace what had happened after the dog was removed from the accident scene. He was taken immediately to an emergency clinic, and the report stated, “The dog was reunited with his owner.”  He SURVIVED then, at least so far as the report indicated. He was “REUNITED WITH HIS OWNER!” These are surely some of the best words I’ve ever heard.

As I was leaving the Humane Society with a smile on my face, the woman who had helped me beamed, “Happy endings!”   I told her I was writing a blog about Better Endings, and that made her smile, too.

“This works!” I thought to myself. I am beginning to see “better endings” as a spiritual principle that helps me live my life in a more conscious way. I mean, I’m sure I would have still tried to help the dog at the scene of the accident . But would I have gone back two days later to the Humane Society to follow up? So interesting that my friend at lunch Saturday had heard of a similar-appearing dog being sought at the same location as the accident occurred.   It was as if Spirit or the Universe (call It what you will) orchestrated this whole experience like a miracle.  The timing of putting someone (me) right at the scene where without intervention the dog probably would have been hit a second time and killed; the people who gathered around to keep the dog calm while waiting for help to arrive;  the TV story on the same day that would lead me to follow up on the dog’s condition: all of these miraculous events conjoined and the injured dog “was reunited with his owner.”